Welcome everyone :) Things may be a little slow at the moment as I am in my last few months of school so I am swamped with work and exams but if you had time to leave a comment it would make my day! 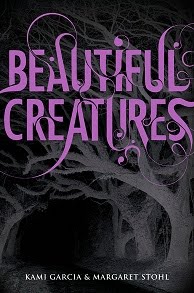 
There were no surprises in Gatlin County.
We were pretty much the epicenter of the middle of nowhere.
At least, that's what I thought.
Turns out, I couldn't have been more wrong.
There was a curse.
There was a girl.
And in the end, there was a grave.

Lena Duchannes is unlike anyone the small Southern town of Gatlin has ever seen, and she's struggling to conceal her power, and a curse that has haunted her family for generations. But even within the overgrown gardens, murky swamps and crumbling graveyards of the forgotten South, a secret cannot stay hidden forever.
Ethan Wate, who has been counting the months until he can escape from Gatlin, is haunted by dreams of a beautiful girl he has never met. When Lena moves into the town's oldest and most infamous plantation, Ethan is inexplicably drawn to her and determined to uncover the connection between them.
In a town with no surprises, one secret could change everything. Goodreads
Wow. No, really. Wow. Word can’t really describe how much I loved it. It has been reviewed and raved about like mad recently. I’ve read so many amazing review but also a few so-so reviews. It was on my TBR List but I didn’t think about reading it until I saw it in my library. I’m so glad I did. It was overwhelmingly amazing. I can’t say I read it in a few days, it took me about 4 weeks to read it, which I know is a long while. The size of the book scared me slightly. I’m not so fond of books that breach past 400 pages. It automatically doubles, or triples the length it would take to read. It is all up in my head. I have been really busy as well though, so it has nothing to do with the content.
Hmm. Where to start? I loved that it was narrated by a boy. I’ve gotten to a point where I assume the narrator is a girl. I was so confused at first, I was like huh? And then I reread the blurb and saw that it was narrated by Ethan (My advice, read the blurb first to avoid confusion. I’m a little slow sometimes).  There have been a lot of criticisms that say Ethan is too observant to be a boy, and slightly too girly. I disagree on both counts (despite not being a guy). To me, he is just an observant guy, and his parents seem like the type that would encourage being observant.
Ethan was a lovely guy. I loved his dedication to Lena, his support and affection. I can’t say I was immediately fond of him but he definitely grew on me the more he was with Lena. Lena is definitely my kind of girl. I want to be her friend. She was a girl who wasn’t afraid to be herself. She had courage, which I admired. But by far my favourite character was Link. Link is slightly slow but he is just so lovely, and is a great friend to both Lena and Ethan, even when things turn sour. The characterization in general was fabulous. All very three dimensional, with lots of detail so you felt like you really knew them.
The book was full of twists and turns, and I constantly had my mouth open, in pure awe of what was going on. Everything happened too quickly and too slowly all at once, and it was amazing. The pacing was incredible. Towards the end my eyes went into overdrive, trying to double the speed at which I normally read because I was so anxious to read it. The whole book sucked you in and you felt you were right there with them, involved in their lives, caring what happened to them.
Overall, it was just an amazing read. Fast paced, wonderfully written and fabulous characterization. What’s not to love?

My To Read Pile